My three-year-old really fancies his pacifier. Insert your look of dismay here. Now insert my look of ‘like I give a crap.’

Many parents debate when the pacifier love affair should end. My husband and I have taken a joint position on this one. Well-meaning friends have suggested the Pacifier Fairy pay us a visit, confiscate our robust collection, and donate it to a made-up place I couldn’t explain to my child with a straight face… Needless to say, the Fairy won’t be dropping in anytime soon. Here are 15 reasons why:

1.  No kid has to remove their “Paci” for their driver’s license photo.

2.  I’m firmly of the belief that he should be potty trained before his pacifier is taken away. And Lord knows Mama’s got her work cut out in that department.

3.  Keeping a bulk order of Soothies on my Amazon Subscribe and Save helps guarantee I will save 20 percent on my total. And I’m all about saving money. Yes, this is my thinking here.

4.  My son is a vat-of-shit-crap-ass-blood-sucking sleeper. And Paci helps him. When he doesn’t have it, sleep suffers. Less sleep = worse mommy = Paci stays in the picture.

5.  If a fairy should blow through our home, she should bringeth and not taketh away.

6.  Thumb-sucking would not have been better for him. Within five minutes of waking, his thumb has already cleaned out the window sill, found its way into his nose (and mine), and drawn train tracks along the inner rim of his brother’s Diaper Genie. Pacifiers can be taken away at some point. Thumbs can’t. (Well, not legally.) I’ll pass on pushing the thumb agenda. (Besides, the only thing more annoying than unsolicited opinions, are retroactive unsolicited opinions.)

7.  His crib would look depressingly empty without 20 pacifiers tucked around the periphery.

8.  I never used one and I still had braces for over three years, as did both of my sisters. Same for my husband. That’s four people with 12 years of braces, and no pacifier usage. Next.

9.  When I was seven months preg with #2, I weaned my sad son from breastfeeding. Paci’s status was instantly elevated from “Nighttime Companion” to “Bestie.” Weaning was hideous, and Paci’s popularity made it two degrees less than hideous.

10.  I learn a lot about people when they offer their insights on Paci. I’m not sure if I’m ready to give up this window into their psychological makeup just yet.

12.  I grew as a person when I stopped begging him to remove Paci for pictures. Whether we hire a photographer or we’re snapping a quick pic on my iPhone, the photos capture exactly where we are right now. And I like it here.

13.  I have been forced to think on my feet in hotel rooms when my overtired, screaming octopus needed to sleep, but his flailing limbs knocked all the pacifiers out of the crib slats. Rolled up towels and other quick fixes keep me on my toes, and that’s a good place to be.

14.  His speech is just fine. He simply removes it to speak, then replaces it. Maybe it’s a survival thing, but he makes it known when he needs something – like a different color Paci.

15.  Because the Fairy has not been invited. 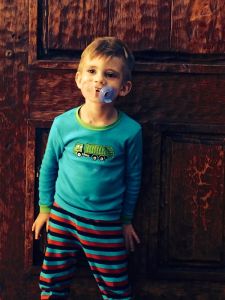 Sometimes two are better than one

Leyna Juliet Weber is a Mother/Writer/Actress in that particular order. She is the Co-Founder of WorkingBug.com and lives in Los Angeles with her husband and two small sons in a home that consistently looks vandalized.

← Report Me to the Services, My Son is Starting Preschool
Dear Perfect Mother →